Herlewin Gillygate is an enterprising jester. Not only does he serve as jester to the King Ludnut of the Kingdom of Dreary most days of the week but he has opened a little shop down on Back Water Alley where, on his day off, he sells all manner of poppets, theatres, masques, and juggling balls. Jesters are, by their very nature, bursting with energy and glee. Herlewin is no different but in addition, he is rather an impulsive sort. He loves his poppets but tires of using the same old props day in and day out. So, he peddles his cast offs in his Jolly Jester Prop Shoppe and why not? Believe it or not, there IS a market for such things, especially amongst jesters in the trade, jester wannabes or collectors of jester memorabilia. Most of the props are constructed by Herlewin himself and are unique in all the world. So, if you are ever wandering the back streets down near the wharf, seek out the Jolly Jester Prop Shoppe! It’s never the same shop twice and, as Herlewin says, “The more mirth, the merrier!”

This shop was constructed in 2011 in a class taught by Ellen Scofield in Dedham, MA. The class taught us to lay “stone” made of torn egg cartons and to apply paint to a stuccoed surface. The jester doll and marrotte were made by Joy Cox of England and the various marrottes were primarily made by Judy Orr and Beth Diane Hogan, both of CA. The mid-sized jester ‘butterfly’ doll was made by Judy Orr. The Pierott doll in the frame is a Heidi Ott doll. Made by me were the two small jack in the boxes (1975), the hand puppets stuck in the log(from kits), the small paper puppet theatre and the large nursery rhyme theatre (both kits). 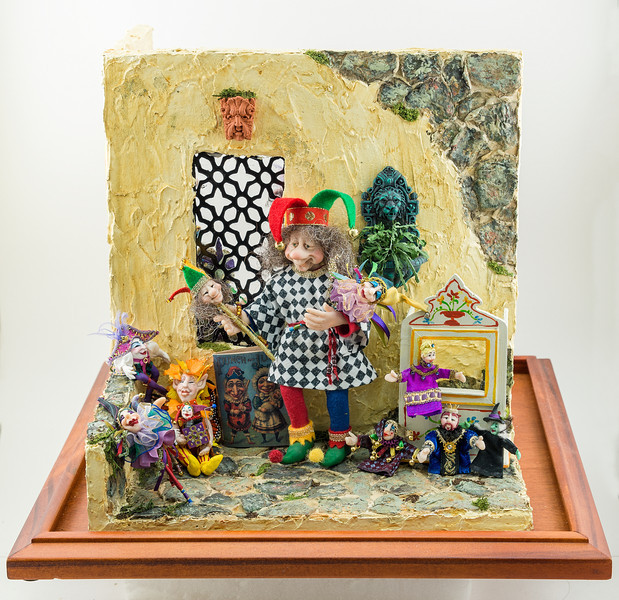